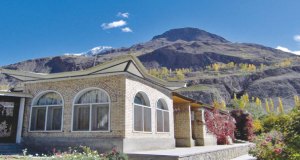 The Karakoram Range in Gilgit Baltistan in northern Pakistan are the highest mountain ranges in the world. The snowy mount cliffs, glacier valleys and difficult rocky terrains with altitude from two thousand to eight thousand plus metres high make them unique mountains on the earth. Their distinction among other mountains of the world is not only that they are the highest but also barren.

The rocky Karakoram Mountains allow hardly any vegetation to grow. There is no top soil on hundreds of metres of the steep and slope stone-surface except a few inches of clay in tiny bowl shaped holes made by millions of years of weathering or flooded strips of mud in narrow cracks or deep gullies. Hence no big trees grow and no grass cover can thrive except a few bushes and rarely a bunch of shrubs grown at every kilometre or two.

When seen from a farther distance the Karakoram are giant blackish dark brown stone slabs lined up in a beautiful scheme; hence Karakoram means black mountain in Turkish language. It is next to impossible for any creature or human beings to stand on the surface without the grave risk of rolling down into the Indus River within few minutes. Only ibex and markhor, blue sheep, Marco Polo sheep or the snow leopard can survive the tough environs.

Every village has a tragic story of losing dozens of men while digging water channels in the rough terrain to bring water from the streams coming down the glaciers at a higher altitude, to their fields and gardens in the mountain patches or while repair work when eroded.

In the mid 80s Aga Khan’s Rural Support Programme (AKRSP) organised the villagers to solve their problems by constructing durable concrete water channels. They introduced saving schemes, supported by technical guidance of engineers who also resolved designing and construction issues for these channels and small water reservoirs. In the Gamadas village in Nagar valley some 80 km north east to Gilgit, on the bank of the Hunza river, the AKRSP and Ghamadaskutz community decided to build a medium sized reservoir for 40 households on 200 hectares.

The tank has now resolved the problem of drying crops during summer when water becomes scarce. It cost Rs 1.6 million, a third of which was contributed by the Ghamadas community through labour as well as land. Now water is available even in the dry season and the whole village has water supply at the doorstep for drinking and washing purposes.

After I finished my school and college in Nagar and Skardu in 1997, I moved to Karachi for my graduation. I came back to Nagar during a semester break after a period of two years. Like my grandfather, the mountain of Khayadar had become white. At 13 we used to go on this deserted mountain and collect the small desert shrubs for firewood and a few classmates would sit around the fire finishing homework assignments for winter break.

A couple of centuries ago, Khayadar used to be a grassland for Minapikutz, the community of village Minapin some four kilometres north to my village Phakar. But the grassland alp had turned into a desert while the Minapin-glacier retreated away year by year with increasing temperature and climate change.

Deep mountain edges appeared due to erosion and it became impossible for the villagers to reconnect the channel and supply water. Khayadar became a forgotten grassland. AKRSP identified the area as very important historical resource and involved the village organisation of Minapin to team up self help with the knowledge of modern professionals and engineers.

The technology was simple; they used a pipeline from the broken canal to the water source passing through the eroded mountain edge. The water ran through it and reached the ancient Khayadar canal as it had in the past. Within a period of one year, the grassland became green and one could spot butterflies.

Presently the Minapinkutz community uses the grassland for growing potatoes in the lower alluvial patches in summer and as a grazing area in autumn and winters. Tourists from Hunza valley across the river come to Minapin Nagar and like it very much.

It is a fin example of how people at grass root level fix their problems when they are given ownership and responsibility. Community initiatives are low cost, least corrupt and sustainable.

I am an educator by profession, pursuing my further career in teaching and learning. I love to read and, even more, love to share what I read.
View all posts by Ahmad Amirali →
This entry was posted in Nature & Environment. Bookmark the permalink.
%d bloggers like this: