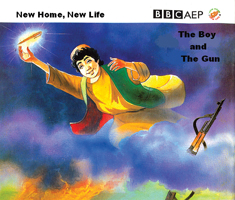 Grandparents and parents telling bedtime stories are among the memories most of us carry through adulthood. Stories, unlike toys, cost no money and can germinate on the tongue of the storyteller, or in the deep recesses of common memory and legend. The stories we heard stirred our childish imaginations, gave wings to a thousand fantasies, instilled precepts of right and wrong, and even embedded prejudices into our subconscious. But not all children can take this seemingly universal childhood memory for granted. In Afghanistan, where decades of conflict have torn families apart, uprooting them from their homes, many have grown up with their childhoods distorted by the sheer weight of survival. With fragmented families and life expectancy hovering around 40 years, children are lucky if they ever get to live with their grandparents, lucky if they can go to school, lucky if they are able to experience any of the idle joys of childhood.

Against this backdrop, the BBC’s ‘Stories for Living’ is among the most valiant efforts to keep the imagination of Afghan childhood alive. A broadcast of children’s stories, it is prepared in Dari and Pashtu by the BBC’s Afghan Education Programme (AEP). AEP has also published some of the stories in colourfully illustrated books (see pics), which are bought by donors such as the Aga Khan Development Network and distributed free to Afghan children. However, given the country’s low literacy rates, radio remains AEP’s primary focus.

Rather than retelling old folktales or bringing out educational programmes, the AEP has combined traditional stories with the current realities of Afghanistan, using animal characters to fire the imagination of children. So, for instance, the ‘Peddler’s Bag’ yields magical games to teach children how to count or spell, while a story about a returning refugee tackles the sensitive issue of building acceptance for someone who might look, dress or speak differently. The idea has been to introduce children to ideas that other children usually learn in school, but without making it appear tedious or like ‘work’, says Shafiq Hakimi, the interim project manager of the AEP. The magical tonga, for example, has a woman driver who can take children anywhere they like, be it a country or a post office or a museum, where they learn what takes place at the destination.

Yet finding role models – the staple stuff of children’s stories – has been a challenge, admits Hakimi. Over the last thirty years, it was commanders and fighters who became the natural ‘leaders’ in Afghanistan, not thinkers, philosophers or even politicians. Consequently, in ‘Stories for Living’, the role models defy expectations: there is a blind girl who has learned several languages, a scholar who had written several books, or a poet such as Rumi who is accepted throughout the country. The appeal of these programmes has cut across boundaries, even winning support from the Taliban. This has led to some comic encounters: Hakimi recounts one instance in which a vehicle chased the AEP team on the road leaving Jalalabad, only to catch up and demand a share of the load of children’s books they were carrying.

I am an educator by profession, pursuing my further career in teaching and learning. I love to read and, even more, love to share what I read.
View all posts by Ahmad Amirali →
This entry was posted in ECD. Bookmark the permalink.
Loading Comments...
%d bloggers like this: