Hunza Fear Overflowing lake will Wash them away 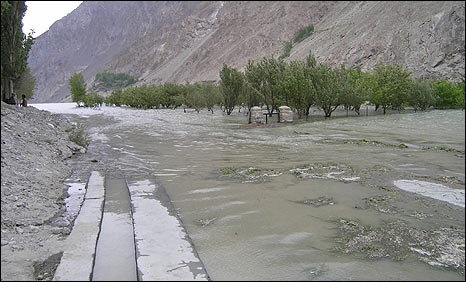 To the right, the once steep ridges on which Attabad village was perched now present a vast descent of loose rocks and rubble that fills up the gorge of the Hunza river, creating a huge embankment.

For nearly five months, this embankment has blocked the flow of Hunza river, creating a lake upstream and a desolate gorge below.

If and when the bank is breached, officials expect a 60.96m (200ft) wave of water to hit the areas in immediate vicinity downstream from Attabad on the north-eastern Pakistani border with China.

Alarm bells started to ring early in May when rumours went around that the embankment was about to give way to rising water levels in the lake, by then some 91.44m (330ft) above the riverbed. 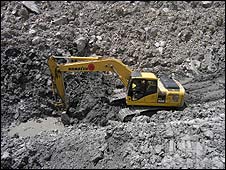 This has sent residents of dozens of villages – such as those in Salmanabad some 2km (1.24 miles) below the embankment – running for cover.

Salmanabad today wears a deserted look. There are padlocks on houses and mosques are closed.

Orchards of cherries, apples, peaches and apricots are in flower, but there are few people to be seen.

In the distance, a couple of families are loading their household goods onto a small truck.

“It is not an easy decision,” says Gul Meri, one of the residents.

“The fruits are ready to be harvested, but we have to leave. The administration says if we stay on, we will drown.”

Officials in Karimabad, the nearest town in the region, say thousands of people have been asked to move out of more than 18 villages located downstream of Attabad lake to temporary camps set up for them in several places.

Those from Salmanabad have been shifted to a girls’ college building in Karimabad.

Most of them are angry over the delay in the digging of a spillway by the government, which could have averted the threat of a major breach in the embankment.

“If the government had acted soon after the landslide took place, there would have been no lake and no displacement of people at a time when they should be looking after their orchards and their livestock,” says Ali Karim, whose family is living at the college building in Karimabad.

Cut off The story of the people living upriver from Attabad is no different.

Following the landslide in January, they have watched the waters of the river rise inch by inch as it flowed into their villages and houses, forcing them to abandon their homes and move to higher ground.

In addition, they have witnessed large parts of the Karakoram highway – which connects Pakistan with China and is the only means of transportation for these people – submerge into the rising lake, leaving them cut off from the outside world.

Barges and boats have since become the main mode of transport in the affected area.

The embankment that was formed because of the landslide in January and has since served as a jetty for boats that dock here to offload passengers from upriver villages and goods from China.

Dozens of commuters and loaders hang about the jetty, waiting for the boats to arrive.

Behind them, the ever-rising waters of Attabad lake are now reported to be stretching back more than 18km (11.18 miles).

The lake has engulfed two villages and has partly submerged a third.

The spectacle, as viewed from a speedboat in the lake, is overawing.

“You see those houses just above the water line there,” says Colonel Ghulam Ali, a fellow passenger on the boat, pointing to a few scattered structures on the hillside.

“They are what remains of Ayeenabad village. Most of it is under water now.

“When there was no lake, people driving on the highway below often used to wonder why some folks built houses so far up the hills. Now it makes sense.”

Shishket too has gone under water, except for a few houses.

“It used to appear like a star in the sky, but it is now on eye-level,” he says.

I am an educator by profession, pursuing my further career in teaching and learning. I love to read and, even more, love to share what I read.
View all posts by Ahmad Amirali →
This entry was posted in Nature & Environment. Bookmark the permalink.
Loading Comments...
%d bloggers like this: