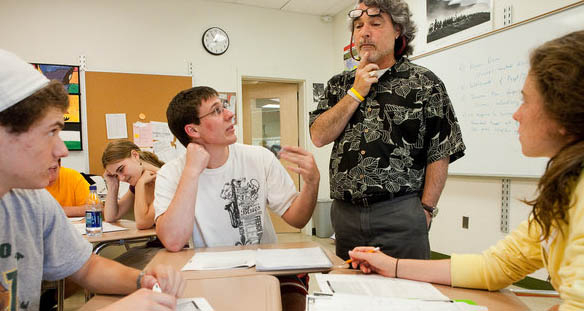 The alphabet soup of college admissions is getting more complicated as the International Baccalaureate, or I.B., grows in popularity as an alternative to the better-known Advanced Placement program.

The College Board’s A.P. program, which offers a long menu of single-subject courses, is still by far the most common option for giving students a head start on college work, and a potential edge in admissions.

The lesser-known I.B., a two-year curriculum developed in the 1960s at an international school in Switzerland, first took hold in the United States in private schools. But it is now offered in more than 700 American high schools — more than 90 percent of them public schools — and almost 200 more have begun the long certification process.

Many parents, schools and students see the program as a rigorous and more internationally focused curriculum, and a way to impress college admissions officers.

To earn an I.B. diploma, students must devote their full junior and senior years to the program, which requires English and another language, math, science, social science and art, plus a course on theory of knowledge, a 4,000-word essay, oral presentations and community service.

Here in Cumberland, Greely High School adopted the I.B. this year to make students more aware of the world beyond the United States.

“When our grads would visit from college, they’d tell us that while Greely gave them great academic preparation, they’d had no idea there was a big wide world out there,” said David Galin, Greely’s I.B. coordinator.

To that end, Greely’s I.B. 11th graders read literature from India (“God of Small Things”), South Africa (“Master Harold … and the Boys”), what is now the Czech Republic (“The Metamorphosis”), Chile (“The House of the Spirits”), Egypt (“Midaq Alley”) and Colombia (“Chronicle of a Death Foretold”).

“Our students don’t have as much diversity as people in some other areas, so this makes them open their eyes,” said Deb Pinkham, the program’s English teacher.

The I.B. program is used in 139 countries, and its international focus has drawn criticism from some quarters.

Some parents say it is anti-American and too closely tied to both the United Nations and radical environmentalism. From its start in 1968 until 1976, the program was financed partly by Unesco. It is now associated with the United Nations Economic and Social Council, and until recently it endorsed the Earth Charter, a declaration of principles of sustainability that originated at the United Nations.

“When there is a program at the school with a specific agenda, which in this case is the United Nations agenda, I have a problem with it,” said Ann Marie Banfield, who unsuccessfully opposed the adoption of the I.B. program in Bedford, N.H.

Others object to its cost — the organization charges $10,000 a year per school, $141 per student and $96 per exam — and say it is neither as effective as the A.P. program nor likely to reach as many students.

“We have 337 kids, and 80 of them take at least one of our 16 A.P. classes,” said John Eppolito, a parent who opposes the planned introduction of the I.B. in Incline Village, Nev. “If we switched to the I.B., the district estimates that 15 kids would get a I.B. diploma in two years.”

I.B. opponents have created a Web site, truthaboutib.com, to serve as a clearinghouse for their views.

Many schools, and many parents, see the I.B. partly as a way to show college admissions offices that students have chosen a rigorous program, with tests graded by I.B. examiners around the world.

“I don’t think there is anyone who does not respect the I.B.,” said Panetha Ott, an admissions officer at Brown.

Fewer colleges give credit for the I.B. than for A.P., but dozens give students with an I.B. diploma sophomore standing and some offer special scholarships.

The I.B. is also being offered now in some struggling urban schools where educators say it helps put low-income students on par with their richer peers.

Last fall, the Bill and Melinda Gates Foundation gave the program a three-year $2.4 million grant to prepare low-income and minority students to participate in the I.B.

California and Florida have the most I.B. schools, and New England the fewest.

I am an educator by profession, pursuing my further career in teaching and learning. I love to read and, even more, love to share what I read.
View all posts by Ahmad Amirali →
This entry was posted in Education. Bookmark the permalink.
Loading Comments...
%d bloggers like this: