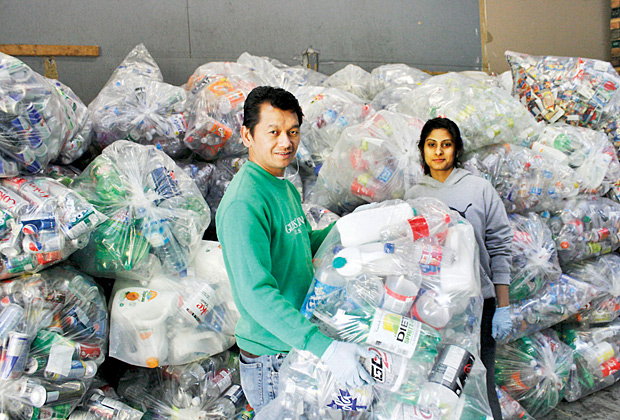 Thirst is good for the Langley Bottle Depot and several local community groups. The bottle depot staff spends each day surrounded by pop cans and juice bottles and jugs as they sort, compress and ship off these former food containers that are now being turned into cash for many local community groups. In 2009, the operation took in 17.421 million containers with deposits on them. Many of those empty containers went to help community groups. When someone drops off bottles but doesn’t want the cash back, the funds can be earmarked for a cause of the customer’s choice or divided up between different groups.The Langley depot, on Industrial Avenue, has more than 120 fundraising accounts on the books and also does campaigns for emergency causes. The depot recently ran a six-week campaign to raise funds for Haitian earthquake relief, sending $1,000 to the Red Cross.

The depot staff also have their own pet cause, the World Partnership Walk. Organized by the Aga Khan Foundation, the walk takes place in communities around the world, including 10 Canadian cities. The nearest event is May 30 in Vancouver. The walk raises funds that are used to fight poverty and has been going on for 25 years, the same amount of time the bottle depot has been open. Owner Hanif Devji moved here, taking over the operation from his uncle a decade ago and started doing the community fundraising at the same time. Sure, it takes added commitment and increases staff costs for all the sorting, but Devji said it’s important to him as a member of this community. “I love it here,” he said. And he knows the funds go to help everything from the food bank and medical causes to schools, children’s groups, and more. “It all goes to the community,” he noted. “We have to support the community.”

Devji also knows that his bottom line and being able to employ several people relies on having a sustainable business. “At the end of the day, it’s the community that’s supporting you,” he commented. It’s a community Devji adopted after living in some pretty interesting places and he is no stranger to recycling industries. Born in Kenya, he started in business at a family wholesaler before moving to Nairobi to start a small transport business in 1987. As the business grew, he was asked to transport waste paper, which only served to increase business further. The venture became the Kamogo Waste Paper Ltd., employing over 100 people in the mid 1990s as well as benefiting over 300 street boys who collected the paper for recycling.

I am an educator by profession, pursuing my further career in teaching and learning. I love to read and, even more, love to share what I read.
View all posts by Ahmad Amirali →
This entry was posted in Aga Khan Foundation. Bookmark the permalink.
Loading Comments...
%d bloggers like this: