Exclusive: Reflections on the 2010 Pakistan Flood

Each summer, monsoon rains sweep across southwestern Asia, soaking India and Bangladesh. In nearby Pakistan, the rains are usually less intense, more intermittent, and centered in the northeast.

Rivers rose rapidly, and the Indus and its tributaries in the northern part of the country soon pushed over their banks. As the surge of water moved south, it swelled the Indus in Pakistan’s central and southern provinces. Then the problems started compounding. In Sindh, a dam failure sent the river streaming down an alternative channel west of the valley. The resulting floodwater lake—which merged with existing Manchhar Lake—spread over hundreds of square kilometers. 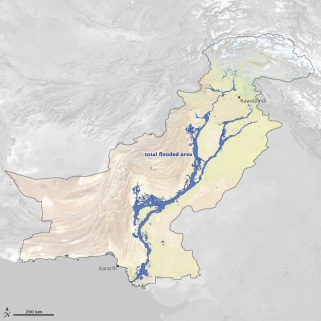 Even after the monsoon rains subsided, waters retreated much more slowly than they had advanced. Months after the rains stopped, crops, homes, businesses, and entire towns were still submerged. In some places, there were few means of water
dispersal beyond waiting for it to evaporate.

The U.S. Agency for International Development estimates that the Pakistan floods affected more than 18 million people, caused 1,985 deaths, and damaged or destroyed 1.7 million houses. It was perhaps the worst flood in Pakistan’s modern history.

I am an educator by profession, pursuing my further career in teaching and learning. I love to read and, even more, love to share what I read.
View all posts by Ahmad Amirali →
This entry was posted in Floods, Natural Disasters. Bookmark the permalink.
%d bloggers like this: