Statement for the 75th Birthday of His Highness Prince Karim Aga Khan IV by the Hon. Jim Karygiannis, M.P. 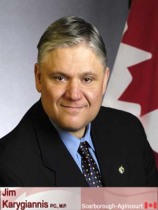 Statement for the 75th Birthday of His Highness Aga Khan IV by the Hon. Jim Karygiannis, M.P. for Scarborough-Agincourt and Liberal Critic for Multiculturalism.

It is with great pleasure that I extend my best wishes to His Highness Shah Karim al-Hussayni, the fourth Aga Khan and 49th Imam of Ismaili Islam, on the occasion of his 75th birthday. Since becoming the Aga Khan on July 11, 1957, at the age of 20, Prince Karim has been an inspiration to Ismaili Muslims and others around the world. He has worked tirelessly to promote both religious and racial tolerance. His strong belief in education has inspired Ismaili young people around the world to achieve post-secondary educational success.

In Canada, not only does His Highness reach Ismailis, his work has helped many Canadians through the Canadian Branch of the Aga Khan Development Network. On June 6, 2005, His Highness was invested as an Honorary Companion of the Order of Canada in recognition of a lifetime of outstanding achievement, dedication to the community and service to the nation.

It is an honour and a pleasure to wish His Highness the best of success and many happy returns.

I am an educator by profession, pursuing my further career in teaching and learning. I love to read and, even more, love to share what I read.
View all posts by Ahmad Amirali →
This entry was posted in Aga Khan and tagged Aga Khan, AKDN, AKU, Ismaili, Philanthropist. Bookmark the permalink.
Loading Comments...
%d bloggers like this: